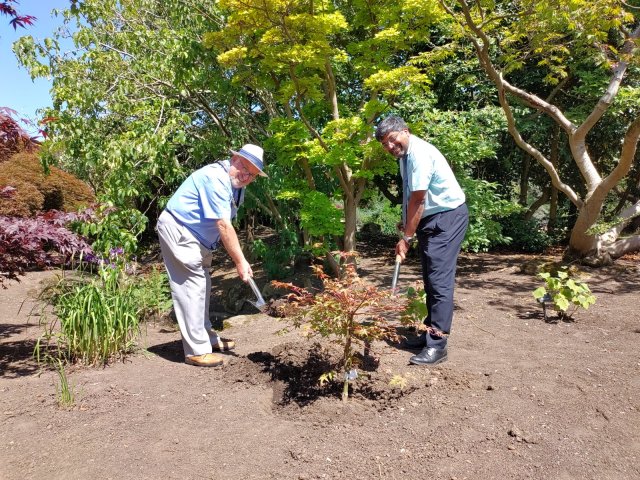 Judges from East Midlands in Bloom arrived in Oadby and Wigston this week to assess the borough’s efforts in the annual competition.

The East Midlands in Bloom competition encourages communities to pull together to improve their surroundings, by assessing not only floral displays, trees and shrubs but also by considering if the area is litter-free and the sustainability of the wider environment.

The competition, which Oadby & Wigston proudly enters every year, is then judged on the core pillars of horticultural achievement, environmental responsibility and community participation.

The judges toured the borough on Wednesday 13 July visiting sites such as Peace Memorial Park, Brocks Hill Country Park and the University of Leicester Botanic Garden.

At the visit to the University of Leicester Botanic Gardens Deputy Mayor of Oadby and Wigston, Councillor Jeffrey Kaufman, also planted a tree as a gift from the borough as part of the university’s ‘100 trees’ campaign to mark their centenary year.

The East Midlands in Bloom entry was co-ordinated by Pride of the Borough, a group of individuals, friends of parks, civic societies, community action groups, neighbourhood groups, councillors and council officers, who all work together to encourage people to take a pride in the area. Oadby & Wigston Borough Council also lends its support to the effort.

The results of East Midlands in Bloom will be revealed in September, with the competition also serving as a nomination process for the areas which will represent the region at the national Britain in Bloom competition.

For the past eleven years Oadby & Wigston has achieved a Gold award in the category of ‘Small City’, the top honour.

Simon Lucas, Chair of Pride of the Borough, said “We’re incredibly proud of our entry this year and we hope that the results reflect the amount of community involvement and effort which is behind not just the wonderful displays, but also our dedication to improving and protecting our environment throughout the year.”

Councillor David Carter, Secretary of Pride of the Borough, said “Thank you to all of our members who have been involved in preparing this year’s entry.

“A huge amount of effort goes into maintaining our public spaces year-round and putting together our entry would be impossible without all of this hard work.

“It is terrific to see so many people come together to take pride in their borough and make it look fantastic, not only for the competition but also for all residents who are able to enjoy the results year-round.”

“The Botanic Garden itself was founded a century ago, and has been an oasis of calm for city residents for generations. It attracts thousands of visitors a year, including 11,000 school pupils on educational trips, and contributes significantly to city dwellers’ wellbeing.

“I am sure the centenary tree will be a focal point for garden visitors over the years to come.”