Coronavirus Outbreak FAQ's - Find out what you can and can't do here: ow.ly/2yQo50zIyCj

Community Hub - If you are vulnerable and need support, click here: ow.ly/yf2k50yVbUb

Volunteering - If you want to volunteer or are a volunteering organisation, click here: ow.ly/yf2k50yVbUb

Need to Contact Us? - Do it online here: ow.ly/1Cwp50yReYJ

This article provides a brief history of Bushloe House in Wigston including some information about the former owners, the architecture, the house and the ecology of the grounds.

Bushloe House was built by Stephen Fry, a Leicester Architect in 1850 for his own use but he never lived here. It was initially rented to a Reverend Berry. In 1866 it was bought by Hiram Abiff Owston (aged 37) and his young bride, Elizabeth Walley Varley (aged 25) of Stanningley Hall, Yorkshire.

Mr and Mrs Owston bought Bushloe House without needing a loan or a mortgage. The couple went on to have six children, Harold, Evelyn, Oswald, Ada, Zoe and Leycester. Ada died in the house in 1942 having spent the last 14 years of her life there alone. Mr Owston was noted for always wearing an orchid in his button hole. The family name Owston lives on today in the law firm he helped create and in the road nearby named after Mr Owston.

Bushloe House is currently occupied by Oadby and Wigston Borough Council and serves as its main office. 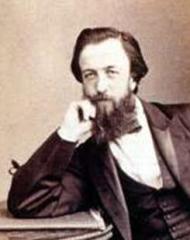 Many features in Bushloe House are world famous examples of Christopher Dresser's work. Examples to look out for include:-

The house stood in two and a half acres of land along Station Road, Wigston Magna and is built in yellow brick with a Welsh slate roof. This style of house was fashionable in Cambridgeshire, Norfolk and Lincolnshire but is a rare example in Leicestershire.

Distinctive features of the house are the spare bay windows, the ornamental chimneys and deep cornice, over hanging eaves, the solid oak panel door with ornate lock and inverted arches under the windows. There was extensive stabling in the yard, two large coach houses, tennis courts, a croquet lawn and greenhouses. At the edge of the estate, near Manor Street there are two houses built for estate workers. Some of the trees in the grounds are older than the house itself by about 100 years. The giant redwood near the front entrance gates was planted when Mr Owston bought the house in 1866.

The grounds of Bushloe House include two Wellingtonia trees which were widely planted in commemoration of the Duke of Wellington's death in 1852. The grass has been kept free from pesticides and herbicides and as a result it has retained an interesting number of herbs like Wood Rush, Lesser Celadine and lady’s smock. At the west end of the site there are relict populations of Bluebells, Ramsons and Dog Violets.

Sparrow Hawks have a long established nest in an old crow’s nest in one of the pine trees on the site and you can often hear their young calling. Lesser Redpolls sometimes appear in the birches. In cold snaps Redwings can be seen in the hollies and yews. Common on site are the Great Spotted Woodpeckers and Long Tailed Tits and the site has been home to Red Mason Bees (Osmias) and Wild Honey Bees.

Your bin collection dates, councillors and other local information

Enter your house number and street name or your postcode

Emergency out of hours

Map and directions to find us