Coronavirus Outbreak FAQ's - Find out what you can and can't do here: ow.ly/2yQo50zIyCj

Community Hub - If you are vulnerable and need support, click here: ow.ly/yf2k50yVbUb

Volunteering - If you want to volunteer or are a volunteering organisation, click here: ow.ly/yf2k50yVbUb

Need to Contact Us? - Do it online here: ow.ly/1Cwp50yReYJ

The following provides guidance on the re-covering and repair of pitched and flat roofs with regard to the requirements of the Building Regulations.

New roof coverings may impose substantially higher loads on the roof structure compared to the original ones. Occasionally the new material may be substantially lighter than the original material. In both cases a Building Regulation application is required to be deposited with the Building Control Section. 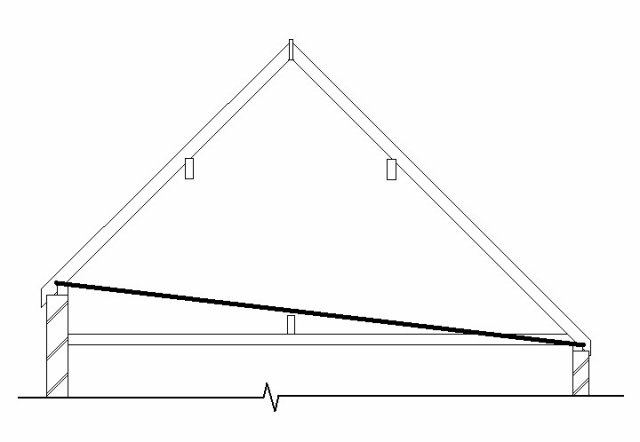 When the roof covering imposes higher loads the roof structure may require additional strengthening work to be carried out and could require a structural appraisal by a qualified engineer to ensure it is capable of sustaining the increased load.

In older premises, typically terrace type properties, it is not unusual for the rafters and purlin's to be under sized and the roof to be inadequately braced to limit the effects of roof spread. The lack of triangulation to a roof can usually be easily identified by the construction of the roof not forming a typical triangle but instead forming a shape similar to that shown in the adjacent diagram.

Where the roof timbers are identified as being under sized and or having inadequate or no measures for the limiting of roof spread, you will be required to make provisions to remediate this. The structure is usually re-mediated by with the addition of additional purlin's and the limiting of roof spread is usually achieved by the addition of ties linking the wall plates together as indicated by the bold line in the above diagram.

As well as the obvious purpose of a roof to prevent the ingress of moisture from the weather, there is also a requirement to prevent the build up of condensation in a roof space. Adequate permanent ventilation will be required to be provided to the roof void either by the use of an accredited breathable roofing felt or permanent open ventilation via continuous strip at the eaves or other comparable means and where a roof is insulated at the pitch line the rate of ventilation must be increased as shown below. Where other means of ventilation such as tile vents are used, these must be spaced at suitable centres so that the rate of ventilation is at least equivalent to the following;

Pitched roof of 15 degrees or less, where insulated at ceiling joist level

Pitched roof in excess of 15 degrees, where insulated at ceiling joist level

Pitched roof of any pitch, where insulated at the pitch line

Mono pitch and lean-to roof of 15 degrees or less, where insulated at ceiling joist level

Mono pitch and lean-to roof in excess of 15 degrees or less, where insulated at ceiling joist level

Cold deck flat roof, where insulated between the joists

Warm Deck flat roof, where insulated above the roof joists

When replacing a roof covering of a property, the roof insulation is required to be increased to the current standard for new dwellings as follows;

A U value of at least 0.16W/m2K (Watts per metre squared, Kelvin) must be achieved.
This can usually be achieved by a combined thickness of 270 millimetres of fibre glass quilt, this is usually laid in two layers, one layer of 100 millimetres and a second layer of 170 millimetres laid at right angles to the base layer.

A U value of at least 0.18W/m2K (Watts per metre squared, Kelvin) must be achieved.
Where the rafters are deep enough the current standard should be met, this can usually be achieved by 165mm of Polyisocyanurate (PIR) rigid insulation, however a 50 millimetre air gap must be maintained over the insulation for air flow and therefore this can only be achieved with 215 millimetre deep rafters. Where the current standard cannot be achieved by this means or by alternatives such as insulating above the rafters, a lesser standard may be accepted to achieve the best possible level of insulation whilst maintaining the required mandatory air gap. 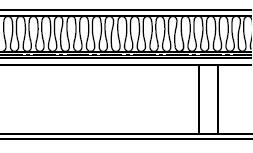 A U value of at least 0.18W/m2K (Watts per metre squared, Kelvin) must be achieved.
This is usually achieved by altering the roof to a warm deck construction typically by applying a 126 millimetre layer of a Polyisocyanurate (PIR) type insulation above the joists and then applying the new weathering layer.

In exceptional circumstances where a warm deck construction is not possible, you may be permitted to install a reduced thickness of Polyisocyanurate (PIR) type insulation between the joists but a 50 millimetre air gap must be maintained over it, where this solution is permitted the roof ventilation will need to be checked and increased to the levels as shown above for a pitched roof with a pitch of less than 15 degrees.

For example, 215 millimetre deep joists would require the maximum depth of 165 millimetres Polyisocyanurate (PIR) type insulation with a 50mm clear air space above. 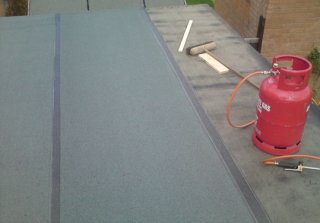 As of the 15 July 2010 the definition of 'renovation' in regulation 2(1) of the Building Regulations 2010 has been amended. This means for example, that the repair of a flat roof by the addition of an additional layer to the existing roof by the laying of a liquid sealant to the roof surface or a new layer of felt will no longer fall within the definition of 'building work' in regulation 3(1) of the Building Regulations as it is a repair not a renovation and as such will no longer be notifiable building work.

Please note that this change does not affect the current position in relation to pitched roofs or where flat roofs are altered by the removal and replacement of a layer or layers.

However where a roof is altered by the removal and replacement of at least 25 per cent of a layer or layers this work is considered to be a renovation and is therefore classed as building work which remains notifiable and requires a Building Regulations application to be deposited unless your chosen contractor is registered with Competent Roofer the competent person scheme for roofing works in which case you will not need to apply for permission from Building Control as the installer will notify their competent person scheme provider, who will in turn notify us.

Yes, unless the work is carried out, inspected and tested by a company registered on one of the following competent persons schemes:-

(i) Full competence schemes covering any electrical installation work in a dwelling, including lighting systems

In buildings other than dwellings

Yes, but if you use an installer registered on the Competent Person Scheme below, all procedural matters will be dealt with as standard.

Yes, an application for Building Regulations Approval for the installation of replacement windows, doors and/or roof-lights will be required, unless the installer is registered on one of the following Competent Person Schemes:-

However, where an opening is to be enlarged an application for Building Regulations approval will be required irrespective of the fitters registration on one of the a fore mentioned schemes.

Yes, where the loading upon the roof is to be increased by more than 15 percent, appropriate strengthening works or replacement of roofing members must be undertaken. However where the roof loading is to be significantly decreased, appropriate works to the roof structure and anchorage must be undertaken to prevent uplift of the roof under wind loading. The only exception to this is if the work is to be carried out and completed by a company registered on the following competent person scheme:-

Please note that it is possible for the installer to be registered on one of the above competent person schemes but not be registered for works to micro generation and renewable technologies, it is therefore important that you ensure that their scheme registration is appropriate to the work that is to be undertaken.

There are several different types of Buildings Regulations application that can be made, however they are not all suitable for every situation. There are three ways in which applications can be made to the Council.

Different types of application and how to make them:-

Please note that when submitting a Building Regulations application a fee will be payable, more information on our fees can be found within our schedule of charges.

All of our application forms and our scales of charges can be found on our forms and fees page.

This page also has many other sources of information in the form of leaflets that may help you with your building project.

Your bin collection dates, councillors and other local information

Enter your house number and street name or your postcode

Emergency out of hours

Map and directions to find us