The Mayor of Oadby and Wigston, Councillor Lily Kaufman.

The Mayor of Oadby and Wigston Borough Council is a role of tradition given to a Councillor for one year.

The Mayor is the First Citizen of the district and represents the council at civic functions and events within Oadby, Wigston & South Wigston and beyond.

The current Mayor, Councillor Lily Kaufman, was elected on 4 May and her term of civic office will run until 10 May 2022. 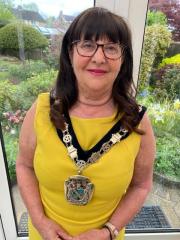 The role is ceremonial, does not carry any decision-making duties, and is non-political and non-partisan.

Councillor Lily Kaufman has lived in Oadby for 37 years. Lily is married to Jeffrey, who is also a borough councillor; they have four sons and two granddaughters. Lily loves living in our Borough and as Mayor would like to see it thrive by encouraging people to visit our beautiful parks and open spaces as well as our three towns which are coming to life again after a difficult period.

Lily’s has chosen Leicester Children’s Hospital Appeal for her charity because of the great need for these services and she wants to contribute something to a struggling NHS during the pandemic we are still having to cope with. The charity’s main aim is to build the first stand-alone dedicated children’s hospital in the East Midlands. They are currently in the process of starting phase 1, which involves the relocation of the Children’s East Midlands Congenital Heart Service from Glenfield Hospital to the Kensington Building to sit alongside the children’s A&E. With charitable funding Lily would like to be able to contribute to bringing the hospital environment up to a better standard than NHS funding alone would allow.

Let’s make a difference to children’s lives right here in Leicester and Leicestershire!

If you have an event where you wish the Mayor to attend please contact: Mayor's Secretary, Oadby and Wigston Borough Council, Council Offices, Station Road, Wigston, Leicestershire LE18 2DR. email: mayor@oadby-wigston.gov.uk. If you just want to donate to Leicester Children's Hospital Appeal please make Cheques to be made payable to: OWBC Mayor’s Fundraising Account or payments can also be made via BACS payments, NatWest Bank. Sort Code: 54-21-50 Account: 34454020. Lily would be really grateful if you could support her charity any way you would like.

See us on a mapContact us online